James Norton stars as Vicar Detective Sidney in Epic Drama’s Grantchester, but is also known for his appearances in Little Women, McMafia, Nowhere Special and Happy Valley, and for European audiences in channel – and in The Trial of Christine Keeler.

His name is still being bandied about as a possible new agent 007, although the British born on July 18, 1985, whom some have described as the Clive Owen of this generation, himself said that “this rumor is very flattering”, but “in there is nothing true about him, unless the journalists know more than I do.”

James himself is no stranger to theology – he studied it at Cambridge in his college years. However, he then begins to gravitate more towards theatre, which is not to the taste of his teachers, and yet theology helps him a lot to win the part in “Granchester” when he auditions.

Norton also enjoys performing some of the stunts himself during filming, such as when he rushes into a burning house to save a woman. What he enjoys most, however, is playing a “broken hero” who drinks heavily and can’t face his wartime demons.

Epic Drama provided Life.bg with an interview with the actor.

In one of the series, my character Sidney saves a woman from a burning house and they let me do that stunt myself, which turned out to be so much fun. 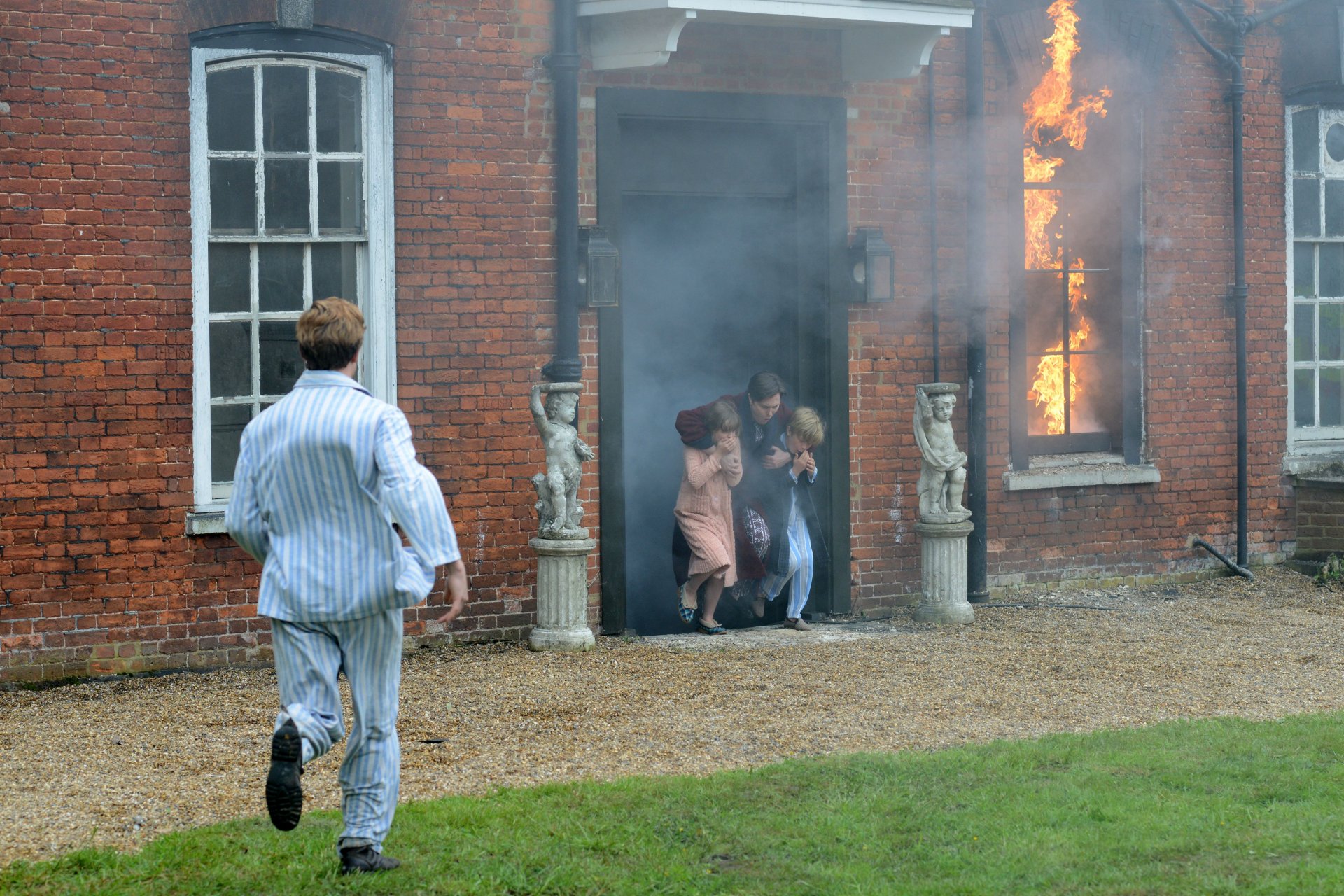 I was in my pajamas running through a burning corridor and it felt very real. The special effects guys are amazing. They were there several days in advance to prepare the building for these scenes.

It was amazing because we came back the next day and the room, which was black and charred with debris everywhere, was completely fine, fixed and cleaned.

Sidney is a man who fought in the Second World War, likes jazz, drinks too much, attracts the attention of women, all while being a village vicar in Cambridgeshire. How does it cost you?

He deals with the same trials and tribulations that young men and women have to deal with. But in the end, Sydney tries to do the right thing.

Everyone thinks he escaped without fighting in the war or was a chaplain in the army. But Sidney has taken a human life and bears his cross.

Like many of those brave men, he is a hero on the one hand, but on the other, he has paid a huge price – his drunkenness and troubled romances.

The fact that he is a vicar does not prevent him from exhibiting the temptations characteristic of a young man. If anything, it makes all those trials, obstacles, relationships, traumas, and temptations more acute.

You yourself were educated at Ampleforth College in North Yorkshire, which is run by Benedictine monks. And you went on to study theology at Cambridge University.

It was a happy coincidence with the series. While at Ampleforth I became fascinated with religion from an academic perspective and as a result studied theology. Half of my fellow students at Cambridge were studying it out of faith to be ordained, I was the other half who were interested in absorbing knowledge of the subject.

Having traveled the world and spent a lot of time in Nepal and India, it made sense that my degree would be based primarily on Hinduism and Buddhism. So I didn’t really do a lot of Christian theology.

When I was at Cambridge, I was more into theater than theology, much to the annoyance of my professor and supervisor. And then I did a complete U-turn and devoted myself to the theater, which I have always loved since I was a child. 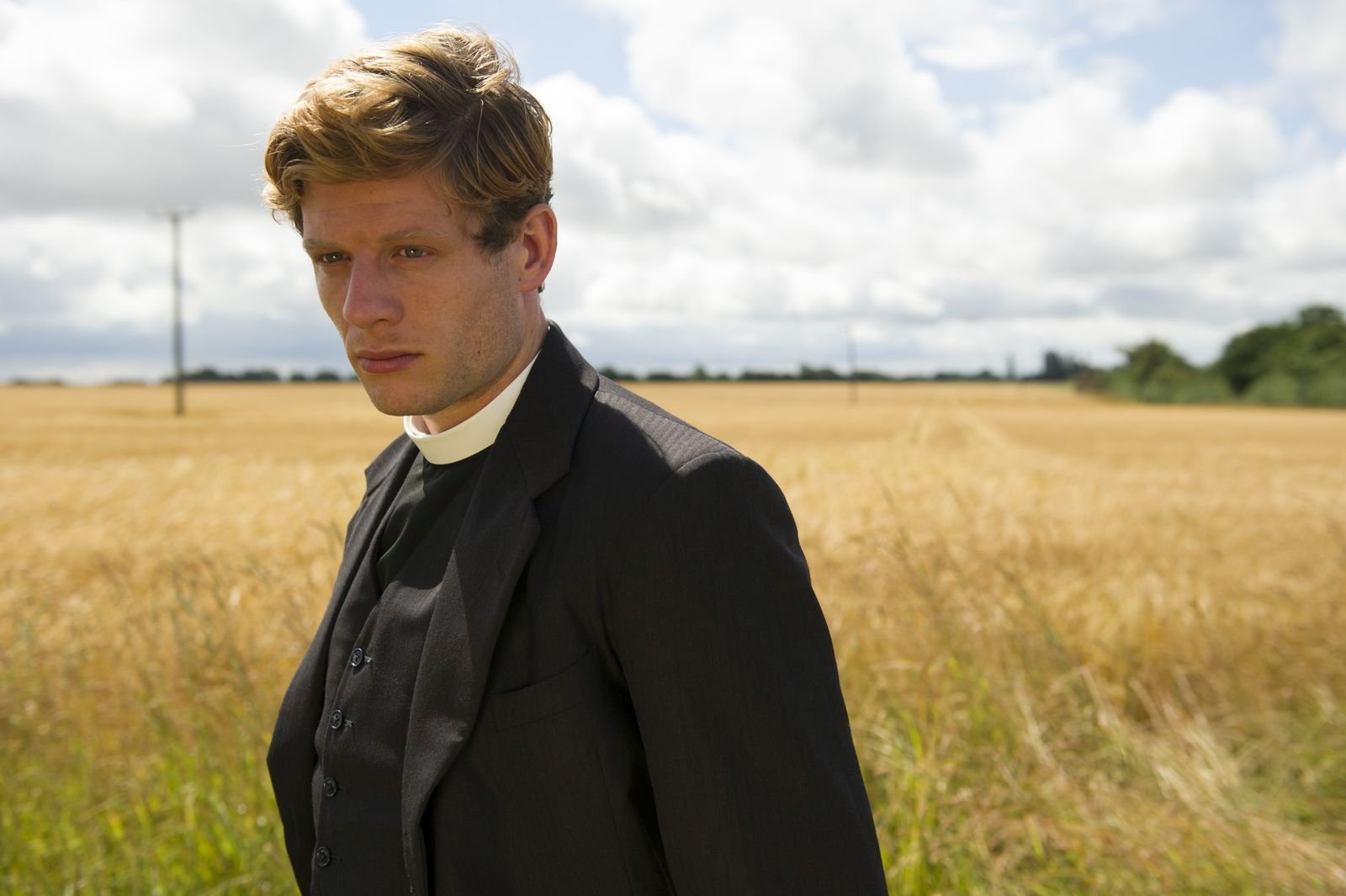 How did you come to audition for the role?

It seems as if there was some Divine intervention involved in this story. But no, unfortunately it was very mundane. The role came the usual way, my agent arranged an audition for me.

But it was a very curious coincidence, because as a Cambridge theology graduate, I presented myself “professionally” at the casting. It was a great opening gambit! They pricked up their ears when I told them.

Sidney is a good guy. He sees the world primarily as a good place. Which is the complete opposite of Tommy, for whom it is a very hostile place.

I was warned that they might hit me over the head with bags, but I got away with it. Maybe it’s because I was filming Grantchester when Happy Valley was on, so I didn’t really go out in public much.

While we were shooting Grantchester, every now and then I would see people looking at me, thinking, “Where have I seen that before?”. Then they happily remarked: “You’re the psychopath!”.

I was so blessed to go from “Happy Valley” to “Granchester” because my characters are very different, but both solid characters, in relationships and situations that we can all relate to.

Sidney is on the right side of the law and is someone people trust. So when he suspects a murder may have been committed, he heads to the Cambridge Police Department. There he meets the initially dismissive Inspector Geordie Keating, played by Robson Green. What will you say about this?

They are opposites – like chalk and cheese. Both are quite wary of each other at first. But then they very quickly realize that they are useful to each other. 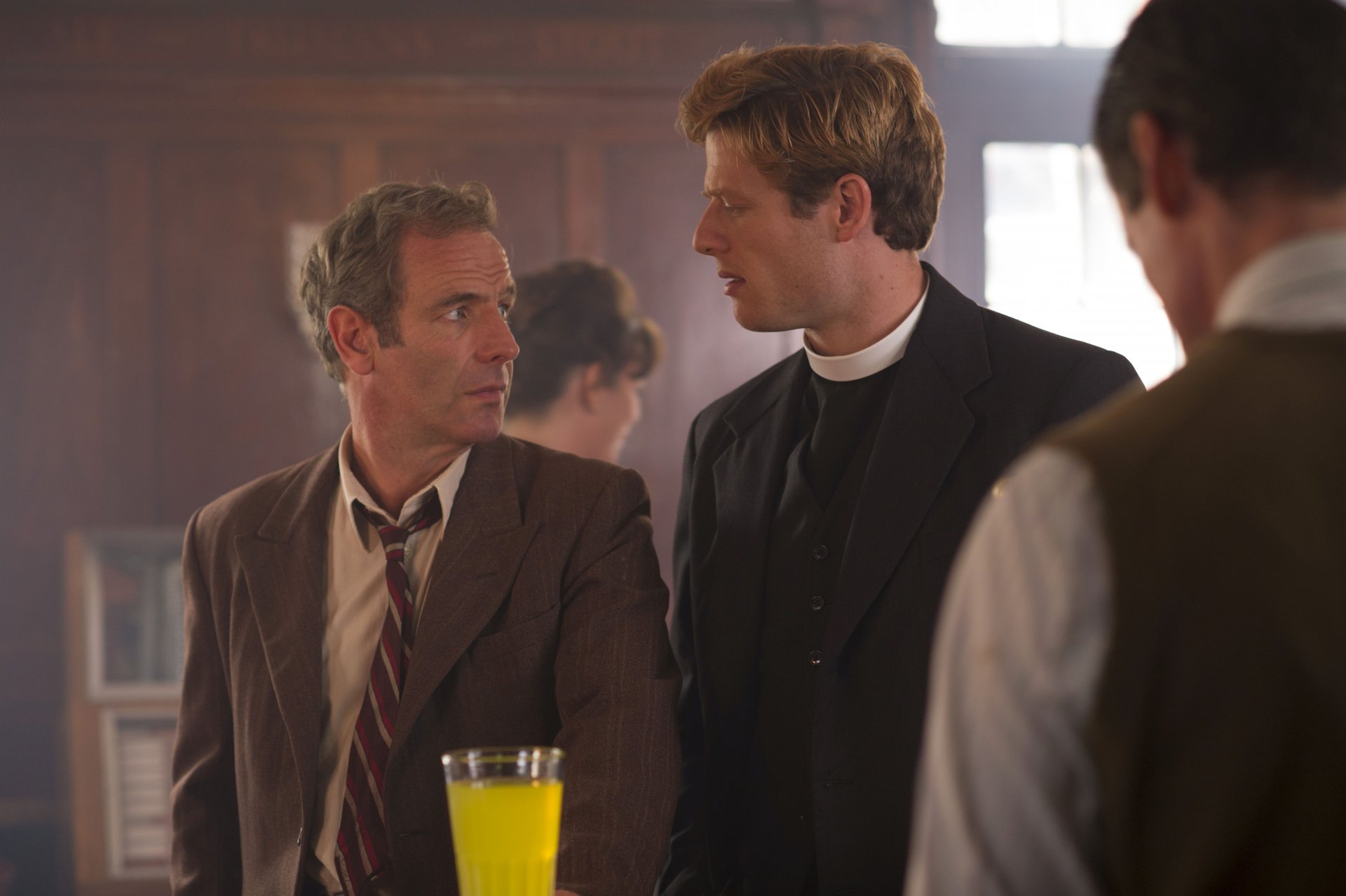 Eventually a friendship develops between them and they become close buddies, drinking beer and playing backgammon in the pub, which was fun to photograph. Robson didn’t know how to play backgammon and that amused me a lot! So he took great pleasure, and a real one, when he said like Geordie Keating: “I won!”.

Robson is such a nice guy! We knew the series required really good chemistry between us. 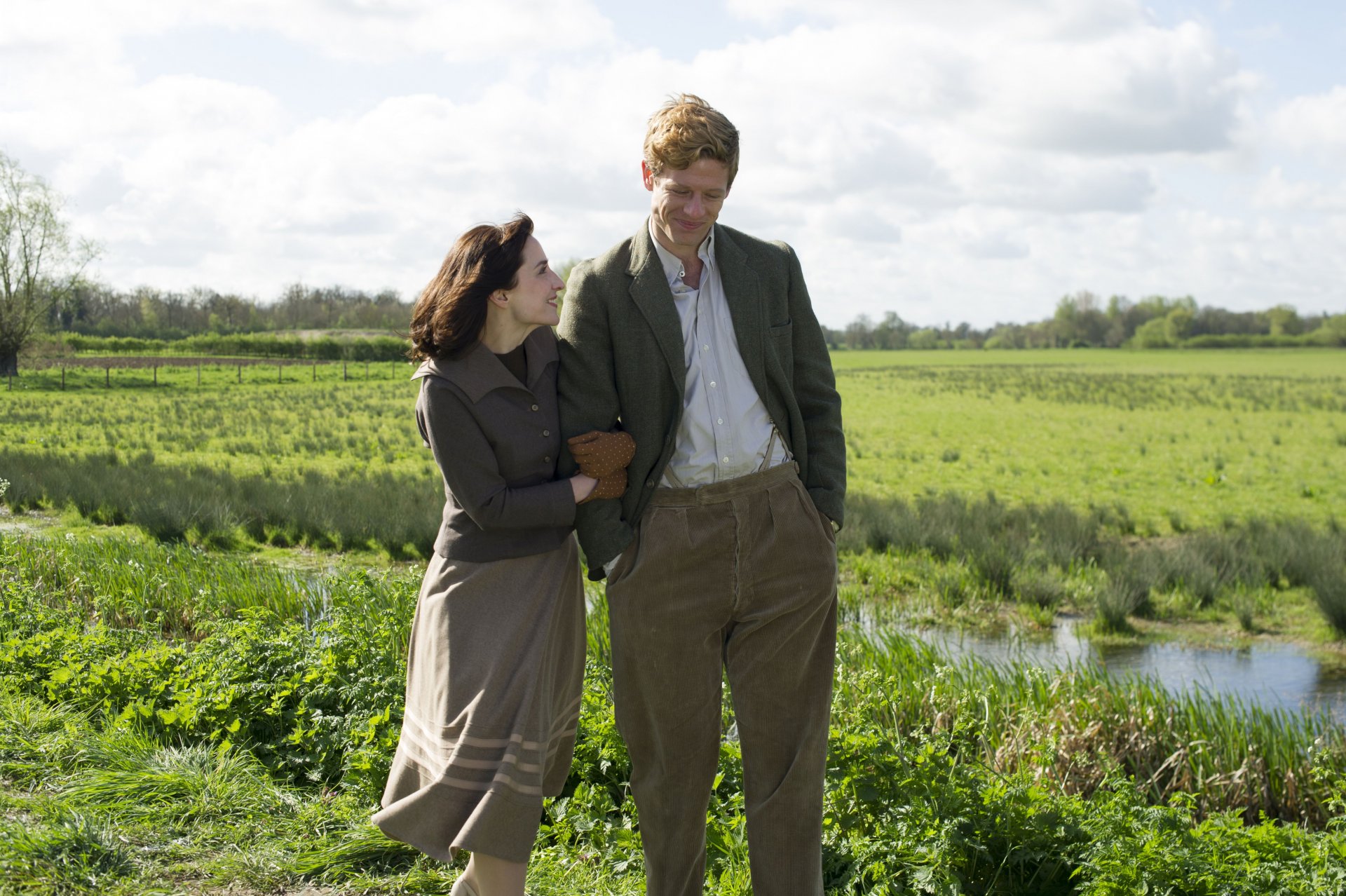 The opening scene of “Granchester” shows Sidney and his girlfriend Amanda (Morven Christie) diving in the River Cam.

We shot this in April and it was pretty cool. But I liked it because I love wild swimming. I like to swim in lakes, ponds and rivers.

So I was really keen. But because of insurance, I wasn’t allowed to do the Sydney river dive. It’s a stunt double. I couldn’t get enough of the shots in the river and it’s a great start to the series. 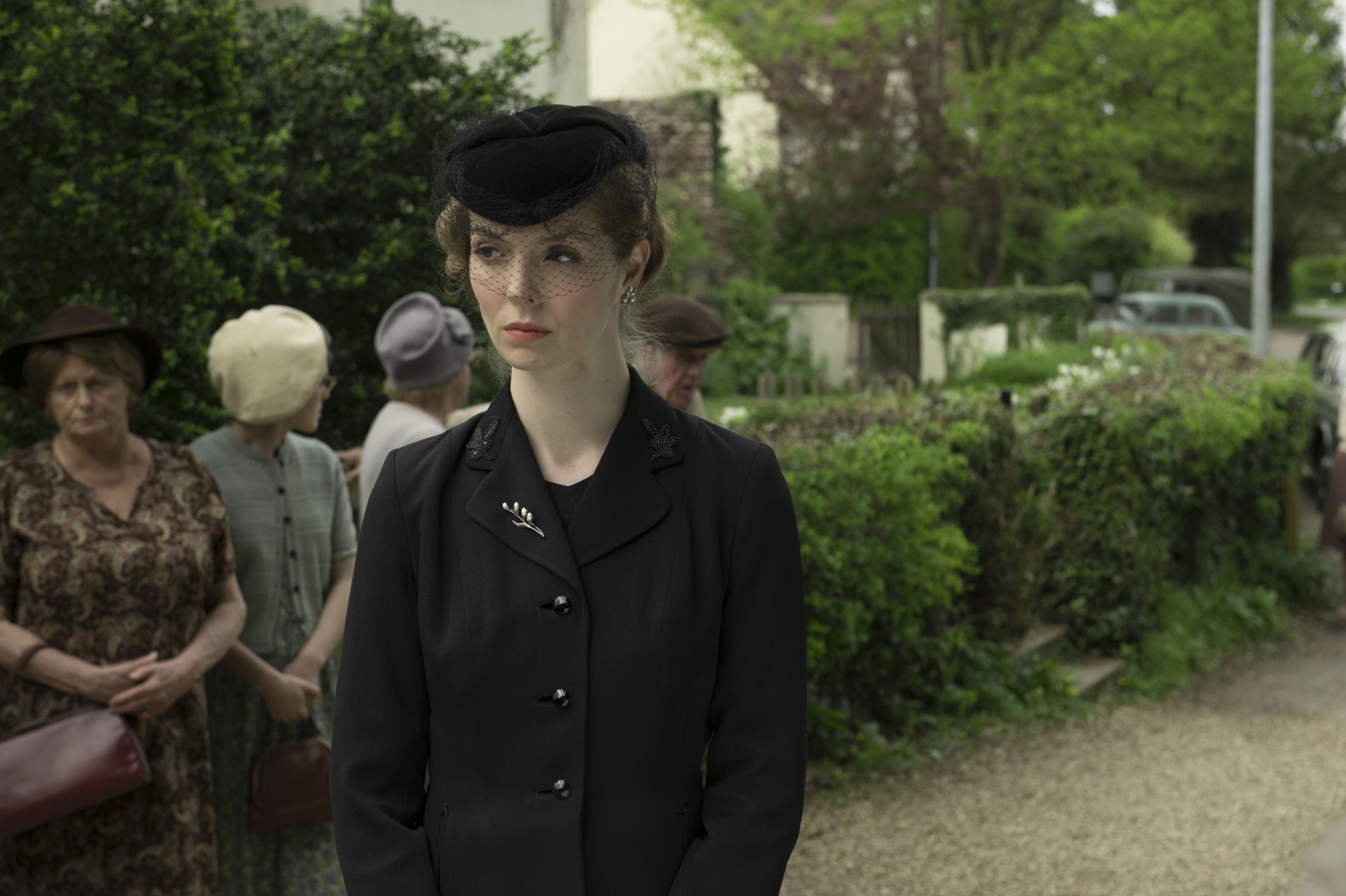 There’s definitely a spark between them when she shows up. Sydney realizes that Hildegard is a very different energy and person than Amanda. But also, it’s very good for him. She reassures him.

I think our writer, Daisy Cullam, intended for the audience to be divided. To have an Amanda camp and a Hildegard camp. To discuss who Sydney should be with.

Sidney is a vicar who drinks whisky, not sherry.

As an actor, you read that and you just think, “That’s fantastic.” With his whiskey, jazz and women, he’s just a normal guy with a free spirit. Drinking is sad because it’s an addiction, but it also indirectly tells a great story about him.

Sydney has flaws. He often deviates from the straight line. There is a belief that people who are very religious are incredibly pure and perfect. And in fact, this is not the case at all. 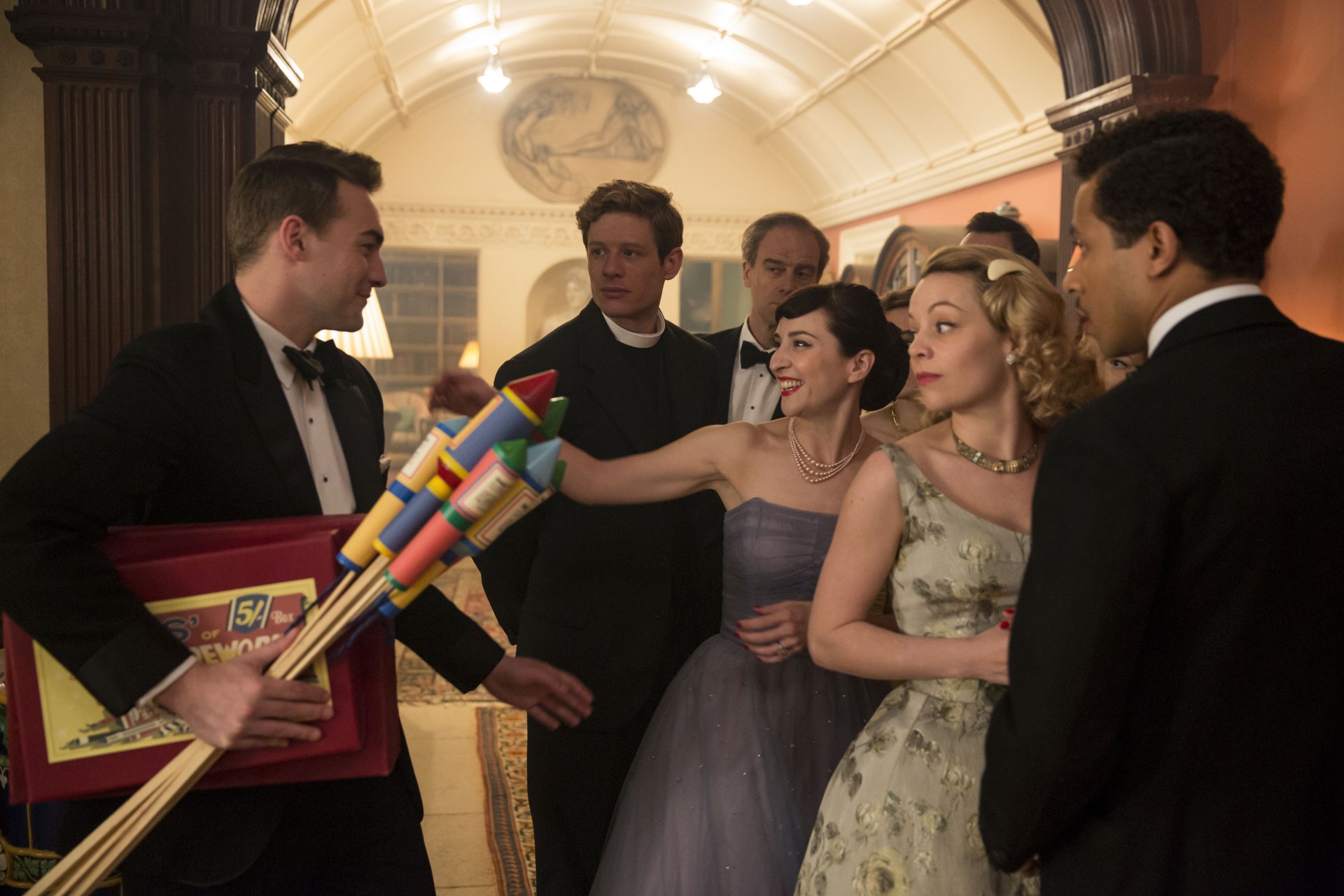 “Granchester” is much more than a standard murder series because it doesn’t shy away from the problems of the period it’s set in, which are still relevant today. For example, the story about euthanasia.

This was a time when homosexuality was still illegal. They sent about it to the prison. It’s good to remind people that there was prejudice like this until recently, and how far we’ve come and how positive that is.

Also the murders, in general and in the series, are never pointless. They are murders of passion, love, loss or jealousy. You are looking at stories of people and lives in a time when the death penalty and hanging were still in force.

You filmed in the real village of Grantchester, including the parish church of St Andrew and St Mary, did you enjoy it?

Grantchester is handsome without being dapper. It is preserved in its period and is wonderful and whimsical. The days we were able to shoot there were very special. It was wonderful to have a connection with the village and the people who live there. It was a very healthy and happy relationship. They saw how exciting it was to have a camera crew and we were very grateful that they were so accommodating.

There was a lady named Pat who really liked us there. She said it was the most exciting thing that had happened to her in years.

We were all injected with excitement and energy.

At the end of the shoot, we had a cricket match – our team against the locals. None of us had played cricket for years. The last time I picked up a cricket bat was when I was 13. But I ended up being a run scorer. I really enjoyed this cricket match. It was great fun and again a good example of how we got along so well. And then we all went to the pub.

While filming Sydney’s sermons, did you feel God’s presence?

It was special. Whether you are a believer or not. Basically in every temple you can feel the feeling of reverence.

After putting on the robes of a priest, I felt everything differently, the air changed, became electrified. And the service people were locals, so half were extras, the others real people from Grantchester. They were really excited. At least until episode 17!

Former Archbishop of Canterbury Rowan Williams gave a sermon at the parish church a week before filming on “Granchester” began.

I heard he gave us his blessing. So maybe we have Rowan Williams to thank for making the entire film so harmonious.

His visit coincided with the retirement of Grantchester’s real priest Stuart Mews, who turned 70.

He was just retiring while we were shooting. So many of the locals were asking me, half-seriously, if I would consider taking on the role for real.

And I half-seriously thought, “Maybe I could!”. If something goes wrong with my acting.

When you were raised by an abuser

Mega Moments: Oh, on a night like this, only a tram passes, as a last watch*

Dilyana Popova and Asen Blatechki gathered for their son’s birthday

They showed Elizabeth II’s first and strangest car, you will be very surprised PHOTO