An activist against climate change today stuck his head to the glass partition placed in front of the world-famous painting “The Girl with the Pearl Earring”, reported Reuters. The work is in the Mauritshuis Museum in the Dutch city of The Hague and according to the staff, it is not damaged.


A second activist stuck to the wall next to the painting from 1665 by the Dutch master Johannes Vermeer, adds BTA.

A video on social media, the authenticity of which has not yet been verified, shows two men wearing Just Stop Oil t-shirts near the work. The video shows one activist dousing the other’s head with a thick red liquid that looks like tomato soup, the Guardian newspaper notes.

“The police were notified of the incident and three people were detained. The condition of the painting was checked by our restorer. Fortunately, the glass barrier prevented damage to the masterpiece,” the museum said. 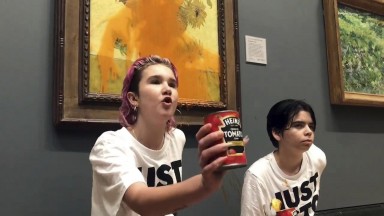 In videos released by the Dutch museum today, one of the activists can be heard saying: “How do you feel when you see something beautiful and priceless being destroyed in front of your eyes?” “It’s the same feeling as when you see the planet being destroyed,” he continues.

This is another attack on works of art in Europe by eco-activists who say they want to draw attention to climate change issues.

In other attacks this month, a Claude Monet work was smeared with mashed potatoes in Potsdam, Germany, and a Van Gogh work doused in tomato soup in London.

Kenneth Branagh will play Hercule Poirot for the third time

“Fame has a price, and I wasn’t willing to pay it”

Identical twins, mud and the half-naked Bella Hadid: How fashion provoked the Internet